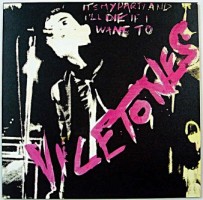 Viletones
It's My Party And I Die If I Want To

The Viletones were the infamous first generation punk rock band from Toronto, Canada.Eminent rock critic Lester Bangs described them for the Village Voice: "This guy Natzee Dog hung from the rafters, crawled all over the stage, and hurled himself on the first row until his body was one huge sore. Somebody asked me what I thought and I said, 'Fine with me - in 1972 every band in the world was Grand Funk, now every band in the world is the Stooges.' I didn't tell Natzee Dog that, though; I told him: 'You guys were cooler with hockey haircuts.'"Contains all their essential 1977 recordings.Limited to 300 copies