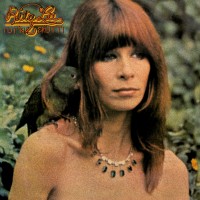 As a founding member of innovative Brazilian psychedelic group Os Mutantes, Rita Lee's reputation is assured as a ground-breaking pioneer. Born Rita Lee Jones in 1947 in the upscale Vila Mariana district of Sao Paulo, Rita's father was an American descended from a Confederate soldier who moved to Brazil at the end of the US Civil War, her mother a Brazilian of Italian origin. After studying piano with renowned musician Magdalena Tagliaferro, Lee switched to the drums. In 1966, she formed Os Mutantes with Sergio Dias and Arnaldo Baptista, introducing psychedelia to Brazil with their debut album. On the edge of the Tropicalia movement, Os Mutantes collaborated with Caetano Veloso and Gilberto Gil, prior to their London exile and released five albums before disbanding in 1972, with Lee also issued two solo albums, produced with Mutantes collaborators. She then formed the short-lived psychedelic folk duo Cilibrinas Do Eden with Lucia Turnbull (the daughter of a Scottish father and Brazilian mother who had played in London with The Solid British Hat Band before returning to Brazil in 1972), but despite a high profile performance at the Phono 73 festival, the project was something of a critical failure, leading Lee and Turnbull to form Tutti Frutti with members of Sao Paulo rock band Lisergia, this time aiming for a glam-rock sound. Third album Entradas E Bandeiras was released by Som Livre in 1976 and recorded at Studio Eldorado with producer Wagner Baldinato< opening track "Corista De Rock" describes our gal as a "Rock Chorist," and there's a Boston-like guitar solo mid/way through from Luis Sergio Carlini to prove the point. "Lady Babel" has a repeated "Hoo Hoo" chorus, while "Coisas Da Vida" is more contemplative< "Bruxa Amarela" has nods to psychedelia in Sergio Della Monica's tubular bells, but Carlini's harmonica and slide guitar bend it back to the blues.