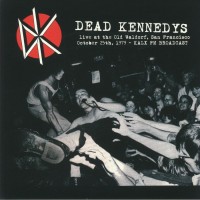 The Old Waldorf, owned by legendary Bay Area concert promoter Bill Graham, originally opened in 1976 and was host to some of the Bay's most important early punk shows featuring The Avengers, The Dead Boys, Bad Brains, and more. Though their debut album wouldn't be released until the following year, Dead Kennedys were already local legends by 1979, and they played The Old Waldorf on October 25th of that year for a live college radio broadcast for KALX FM in Berkeley. With live early versions of some of their most famous songs, including their classic first single, 'California Über Alles', as well as 'Holiday In Cambodia', 'Kill The Poor', 'Back In Rhodesia', and more, this is a crucial early SF punk live broadcast finally available on LP!A1 Kill The Poor A2 Funland At The Beach A3 Back In Rhodesia A4 Dreadlocks Of The Suburbs A5 Police Truck B1 Ill In The Head B2 Short Songs B3 California Über Alles B4 Holiday In Cambodia B5 Chemical Warfare