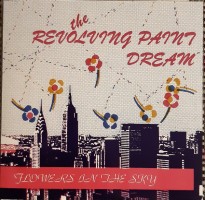 A minor hit on the indie charts when originally released back in 1984, 'Flowers In The Sky' was the debut single from future Primal Scream guitarist Andrew Innes when he was in the short-lived The Revolving Paint Dream. Released on Creation Records - whose founder Alan McGee was actually in the band too - it's now given a second lease of life via this 7" single re-issue as part of the Optic Sevens series, and includes a postcard and poster.