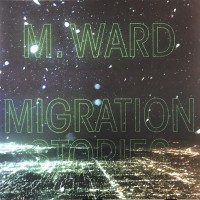 M. Ward has released some wonderful albums over the years. For his tenth record, 'Migration Stories', he took himself up to Montreal, Canada to see some guys from a band called Arcade Fire and use their studio. Tim Kingsbury and Richard Reed Parry were more than accommodating and even lent him their producer, Craig Silvey.