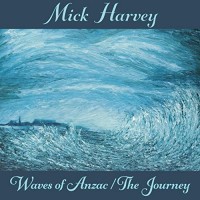 Bad Seed Mick Harvey is no stranger to film soundtracks. Admittedly, it's been the best part of 15 years since he scored a film, but with 10 under his belt, returning to the format shouldn't be a problem. This latest release contains two parts. The first is a piano-led score for 'Waves of Anzac', a film by Sam Neill about his family's connection to the First World War. The second, 'The Journey', was recorded with The Letter String Quartet, is for people who have come to Australia seeking asylum and found themselves detained offshore. Two powerful pieces, made with a lot of heart.