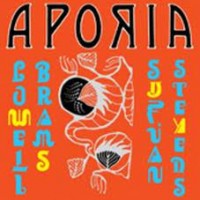 "Aporia" is a New Age album from Sufjan Stevens and his step-father and record label co-owner, Lowell Brams. In the spirit of the New Age composers who sanded off the edges of their synths- sawtooth waves, "Aporia" approximates a rich soundtrack from an imagined sci-fi epic brimming with moody, hooky, gauzy synthesizer soundscapes. The album may suggest the progeny of a John Carpenter, Wendy Carlos, and Mike Oldfield marriage, but it stands apart from these touchstones and generates a meditative universe all its own. This is no mere curio in the Sufjan Stevens catalog, but a fully realized collaborative musical piece. Stevens and Brams recorded "Aporia" over the course of the last several years during Brams- visits to Stevens- home in New York with the help of several frequent Asthmatic Kitty collaborators, including Thomas Bartlett (Doveman), D.M. Stith, Nick Berry (Dots Will Echo), John Ringhofer (Half-handed Cloud) drummer and longtime collaborator James McAlister, keyboardist and trombonist Steve Moore (Sunn O)), guitarist Yuuki Matthews (The Shins) and vocalist Cat Martino.