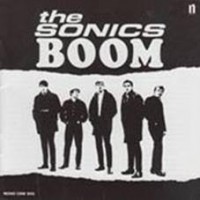 the Sonics' second album, originally released in 1966 on Etiquette Records in wonderful mono. "Boom" still does much more than merely deliver on the promise of the first album, "Here Are The Sonics!". Few records have ever packed as much of a musical punch from start to finish. Even more so than their first LP, it offers a representation of what the Sonics must have sounded like at the peak of their considerable powers.