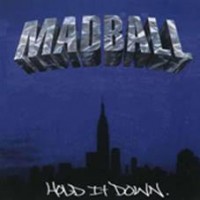 Madball
Hold It Down

Limited 20 year anniversary re-release of Madball's 4th LP "Hold it Down", out on Madball's own the BNB label in cooperation with GSR. Not just another re-release, but entirely revamped and remastered, and on top of that a brand new song "Golden Cross" as a bonus. Sit back and give it a spin or three and let it transport you to the streets of NYC! Produced by Matt Henderson, re-mastered by Tue Madsen.

Various
I Spit On Your Grave Vol.2