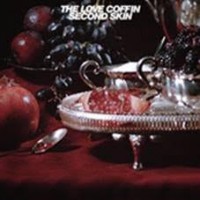 The 10 songs included on Second Skin are quite diverse ranging from the sonic blast of "Seasick" to the haunting opening song "Stripped Down" while "A Shrinking Thing" is melodic and optimistic. But the most remarkable thing about the band is Jonatan K. Magnussen's wildly intimate, volcanic vocals and the cinematic expansiveness of the sonic imagery his bandmates conjure around him. One of The Love Coffin's main assets has always been their passion. That has been proven numerous times at their acclaimed live shows and the very same intensity and nerve can be heard on Second Skin, where the band also discovers new sides of themselves. The Love Coffin is Jonatan K. Magnussen on vocals and guitar, Kristian Alexander Pedersen on guitar, Lasse Christiansen on keys, violin and guitar, Tue Einar Bakfeldt Fly on bass and Alexander Vitus on drums.