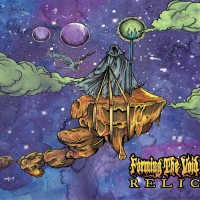 Following the release of last year-s impressive @Skyward@ album, Forming the Void, originally formed in 2013 in Lafayette, Louisiana, has gained an impressive reputation for raising underground rock into realms of the previously unknown. Atmospheric, heavy and progressive yet losing none of these earnest qualities at volume, they layer their ambitions as thickly as the riffs that help transmit their visions. Newly signed to Italian label Argonauta Records, this March will see the release of their third album Relic. Like Skyward before it, it draws on one hell of a colossal sound. Summoning the towering hard rock riffs and progressive influence of bands like Mastodon, Baroness and Torche, Relic finds the four piece illustrating their bold and adventurous ideas in the most vivid of colours.

Nocturnal Breed
No Retreat No Surrender

Nachtmystium
Reign Of The Malicious (picture)