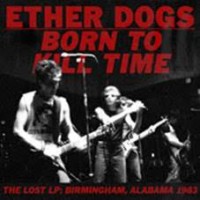 The Ether Dogs are proof that not every stone of early punk has already been turned over. Formed in 1980 in Birmingham, Alabama, they opened up for The UK Subs and Circle Jerks, made friends with the revered early punk band DDT in Atlanta, and recorded an LP's worth of songs that never saw the light of day until three tracks wound up on 2018's 'I've Got the Bible Belt Around My Throat' compilation. Those songs sent collectors on a hunt for the rest of the album and now, over 35 years after it was recorded, the LP finally gets a proper issue on Rave Up. These caustic and out-of-control songs sound as good as ever! 300 copies only.

Hellshovel
Hated By The Sun