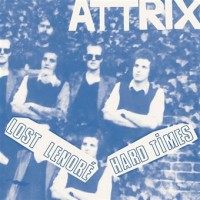 Reminiscent of early Velvet Underground, Attrix were one of Brighton's most active groups in the vibrant local scene during the early days of punk. Originally released on the band's leader own label in 1978, this single is the only record they ever put out.Both tracks are no short of raw vocals and fierce guitars but the band shows also had pop hooks to spare.First ever reissue.TRACKLISTSide ALost LenoréSide BHard Times