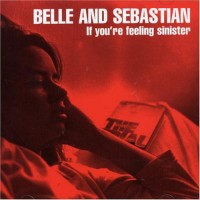 Belle & Sebastian
If You're Fellinf Sinister

The debut was so limited at the time that in those pre-internet days it took until the release of this before many people caught on. It's one of their most consistent albums with some right crackin' tunes as they say especially stuff like 'Mayfly' which showed they could provide some kind of cheerier version of Nick Drake. This album, alonside all their others is being re-issued to celebrate a brand new album, on its way soon.

Belle & Sebastian
Fold Your Hands Child, You Walk Like A Peasant