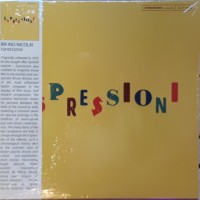 Originally released in 1972 for the sought after Gemelli imprint , Espressioni was credited to longtime Ennio Morricone partner and conspirator Bruno Nicolai, one of the most influential Italian composer in the heyday of film music and modern composition. The maestro Morricone shows his persona between the folds of the record as well, revealing a common sense for obscure leanings in the tradition of avant/garde jazz and classic contemporary. The many faces of the two composers are fully in charge through the 9 episodes of the release, such a chronological history akin to the common area of Italian psycho drama and cultish noir/exploitation short movies. Fascinating tough obscure, these austere compositions should be fitting ideally along your Gruppo D' Improvvisazione Nuova Consonanza or Egisto Macchi essential releases.