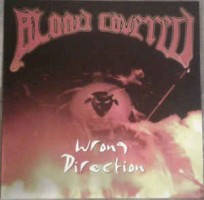 Founded in 1987 in Athens, Blood Covered is one of the best kept secrets of Greece. They managed to record a proper album only in 2000, being "Wrong direction" the only output by these Greek metalheads. Seven songs of epic thrashing classic metal, with a lot of musicianship and atmosphere in them. Three songs out of seven clock over the ten minutes mark and every note here is crafted at the top of the game. An obscure gem!!!