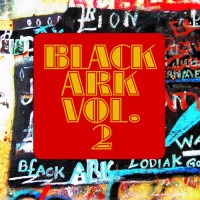 "Black Ark Vol.2" was the follow up album to the acclaimed "Black Ark In Dub" that unsurprisingly for an Upsetter release took a different path. More vocal oriented the album features extended dubwise cuts of "Ethiopia" by Carol Cole (aka Aisha Morrision), Junior Byles, "Mumbling & Grumbling" and The Inamans "How Deep Is Your Love", along with The Originals "Got To Be Irie", Lacksley Castell's "Jah Love Is Sweeter" and an alternate take of the Silvertones roots classic "Give Thanks" with flute overdub and a couple of solid covers from Third World lead vocalist Bunny Rugs. This set is a crucial release for the fans of Lee Perry's Black Ark universe, originally released in 1981, here are all re-mastered tracks recorded with the musicians of the Black Ark Players (aka The Upsetters) and mixed by Lee "Scratch" Perry, in a co-production by Pauline Morrison & Lee Perry. The album comes in a great picture sleeve showcasing exclusive photography detailing original wall art from the Black Ark studio.Tracklisting including playtimeSide OneA1. Carole Cole / Ethiopia 5>11A2. The Silvertones / Give Praises 2>56A3. The Inamans / How Deep Is Your Love 5>06A4. Lacksley Castell / Jah Love Is Sweeter 3>27Side TwoB1. Bunny Rugs / Let Love Touch Us Now 2>50B2. Bunny Rugs / I Am...I Said 3>42B3. The Originals / Got To Be Irie 1>59B4. The Upsetters / Double Wine 2>59B5. Junior Byles / Mumbling and Grumbling 5>52

King Hammond
With The Sound Syndicate