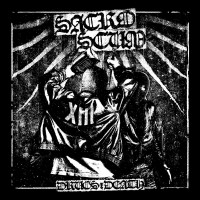 SACROSCUM was formed in 2015 by J. and SS. After playing music together for a long time and trying to create something unique, the duo mixed influences of Darkthrone, early Celtic Frost, Discharge, Skitsystem, Inquisition, and everything they thought would be fitting. Combined with utterly hateful lyrics and a healthy disdain for most of you, SACROSCUM was born. After some recording sessions in their rehearsal room, they created eight pieces of musick which were then released under the title of Stillbirth, courtesy of UNHOLY PROPHECIES in 2016, on cassette tape. Everything "do it yourself" from beginning to end, Stillbirth came from raw, primal aggression, setting down SACROSCUM's foundation for death, dedication, disgust, and what lies beyond all these. But now, with the imminent release of their debut album, Drugs ^ Death, SACROSCUM are primed for their most bountiful ejaculation of filth and hatred - the fullness of their cumming, as it were. Recorded at the band's rehearsal studio and mixed and mastered by Fabi Krapp at Ruins Rust Studios in southern Germany, Drugs & Death is yet another staunchly DIY affair, but this time, the band have dialed in their most destructive material to date, simply taking what once was, adding some unexpected elements and making it what once will always be, truly, DRUGS & DEATH. Nine anti-anthems, 41 minutes of foulness, SACROSCUM never stop the madness, and heartily encourage you to finally drink yourself to death but with a smile on your face.

At The Gates
The Red In The Sky Is Ours

Manzer
Beyond The Iron Portal