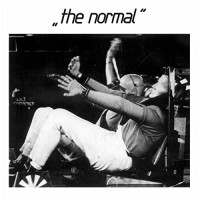 You may already be familiar with the story behind The Normal's only single, but let's go through it once again for good measure. Daniel Miller set up Mute Records in 1978 with the intention of releasing two tracks he'd made on his own with a Korg synthesiser. 'T.V.O.D.' and arm Leatherette' were weird, dystopian and darkly sexy tunes. Minimal wave was born and Miller had changed the course of post/punk. He'd also started up one of the most successful British labels of the 21st Century. Last copies!