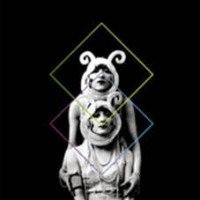 Julie's Haircut
Invocation And Ritual Dance Of My Demon Twin

Julie-s Haircut - Italy-s premiere psychedelic explorers / have created a deep/end approach to sonic innovation on -Invocation And Ritual Dance Of My Demon Twin- - their debut release for Rocket Recordings. Seven albums into their mission the band find themselves at a new plateau of small/hours elucidation and revelation that may summon the spectres of the way/ward squall of early Mercury Rev, the shamanic allure of Dead Skeletons, the freedom of Miles Davis, the repetition of Can or the wild soundscapes of Amon Duul II to some, yet es/sentially sounds like no/one but themselves. The result is a record built on trance/like repeti/tion that grows to a mantric intensity to summon atmospheres redolent of the psychic and surreal transgressions of its title / a double/helix tribute to both Frank Zappa and Kenneth Anger. Coruscating guitar overload and jazz/tinged blowout collide amidst hypnotic soundscapes like the shamanically inclined he Fire Sermon' and the eleven/minute motorik magnificence of the curtain/raiser ukunft'. Yet atmospheric restraint, glacial texture and immersive groove play as large a part in this blinding and beatific soundworld as droning darkness or overheated amp tubes.

Julie's Haircut
In The Silence Electric

Vibravoid
Vibrations From The Cosmic Void

Vibravoid
Wake Up Before You Die