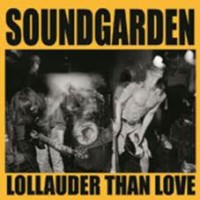 Though Badmotorfinger was released late in 1991, the year grunge broke, it was 1992 that really put Soundgarden on the world-s radar. They were touring continuously across the USA and Europe, handpicked by Guns N- Roses to open for them on the Use Your Illusion tour, as well as playing with Skid Row and Faith No More, and they were invited to be a part of the 2nd ever Lollapalooza tour along with the Red Hot Chili Peppers, and Pearl Jam. Their Lollapalooza set on 22nd July 1992, in Bremerton, WA was a classic one, an epic live radio broadcast from one of grunge-s seminal acts and most talented frontmen, the late great Chris Cornell. Another epic live broadcast on HQ vinyl from Egg Raid.Track list> 1 Gun 2 Jesus Christ Pose 3 Outshined *Feat. Eddie Vedder( 4 Big Dumb Sex 5 Ugly Truth 6 Rusty Cage 7 Slaves ^ Bulldozers 8 Searching With My Good Eye Closed

Butterflies Of Love
Orbit Around You