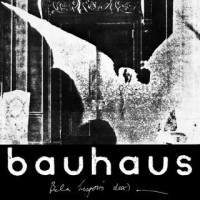 A reissue of perhaps Bauhaus' most popular song, the majestic goth classic 'Bela Lugosi's Dead'. Now, this is a song arguably better known in a live version, but here we have the original 1979 studio recording, presented alongside four other tracks from the session, three of which have never seen the light of day till now.