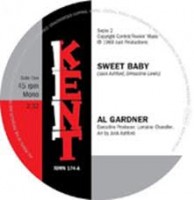 Though Al Gardner's Detroit 60s soul classic 'Sweet Baby' was issued in France as well as on a now expensive Sepia release in Detroit, it has never had a UK 45 release until now. The flip is a terrific previously LP/only track by Jack Ashford - the producer and writer of both sides of this 45. Best known for his percussion work at Motown, Pied Piper and Just, he shows he has a good voice on this great, now popular, song.