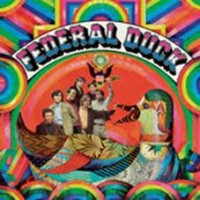 Federal Duck was one of the many college bands to pop up during the psychedelic years and made a name for themselves as skilled musicians, playing numerous gigs over the short span of 4 years.This self-titled debut album, and only record of the band, includes a number of quality tracks, mixing elements ofjazz, country and, mostly, soft-psychedelia.'Tomorrow Waits For Today' stands out as a wonderful piece of jazzy pop psych that could easily rival the best recordings of the genre. But some will find 'Bird' is the most accomplished song on the album, featuring fierce guitars and energetic drums, bordering on hard psych.Although this solid LP successfully mixes such a varied combination of sounds and deserved to have made abigger splash when originally released, it has remained overlooked for a long time, until rediscovered by psychedelia collectors. "Federal Duck" is now reissued on vinyl for the first time.Facsimile artwork and 180g vinyl edition.TRACKLISTSide A1. Knowing That I Loved You So2. Easy Virtue Blues3. Tomorrow Waits For Today4. Just Like The Snow5. Bird6. HelloSide B1. While You're Away2. Peace In My Mind3. Just A Band4. Friday Morning5. Dawn Comes Slow6. Ain't Gonna Be Nobody To Sing The Blues7. Circus In The Sea

Raicevik, Nik
Beyond The End, Eternity

Blonde On Blonde
Reflection On A Life