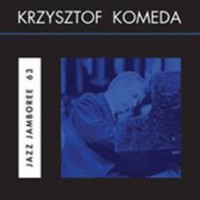 This is the the legendary Krzystof Komeda Quintet caught live at the Jazz Jamboree Festival in Warsaw in 1963. A marvelous combo featuring some of the greatest Polish Jazz musicians such as Tomasz Stanko / trumpet, Michal Urbaniak / tenor sax, Maciej Suzin / bass and Czeslaw Bartowski / drums. Komeda, Stanko and Urbaniak were sort of pioneers who effectively opened up a way for Jazz in Poland. Komeda's fluent modern Jazz conception was a perfect synthesis between the American influence and a certain Slavic lyricism. The album includes an astonishing version of "Ballad From Knife In Water" from Komeda-s soundtrack for the 1962 Roman Polanski's movie. A major statement in the East/ European music history.