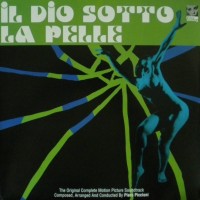 One of the best Piero Piccioni-s contribute for the 7th art. Recorded for the homonymous documentary *1974( by Folco Quilici and Carlo Alberto Pinelli, looking for some people who reject civilization to withdraw in nature and peace, "Il Dio Sotto La Pelle" was released for the first time long time ago *2000(, quickly becoming one of the most sought after records by many collectors and fans. Musica Per Immagini e Sonor Music Editions are proud to release a renewed edition of "Il Dio Sotto La Pelle", where jazz, exotic and lounge music and psychedelia are mixed in an admirable way> introduced by the dreamy voice of Catherine Howe for It-s Possible, Piero Piccioni-s organ gives us fragments of a dazzling splendor such as Night To Come or Give Love A Chance, while Inventions and Katmandu handed down to the posterity the guitarist vein of the opera, demonstration of the period of great creativity crossed by the Italian composers, capable of filtering their traditional and classical action with some rock elements. "Il Dio Sotto La Pelle" is available again as double/LP album with tracks remastered by Claudio Fuiano from first generation master tapes and sequenced by Lorenzo Fabrizi, also including twelve unreleased gems, new graphics inspired by the original posters and designed by Luca Barcellona and Marco Ferretti-s liner notes.

I Gres
I Gres Vol. Ii