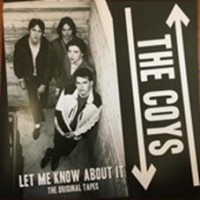 One of Italy's premier 80s Mod bands, heavily inspired by the UK Mod revival of 1979 and 60s Mod culture, the Coys took it full circle forming in 1983, bringing the heavy dancefloor sound back to the birthplace of the motor scooter and fine cut tailored clothing. This album has it all, short sharp songs with RnB inspired dance floor rhythms and loads of teenage frustration rock n roll. Like their heroes the Jam and the Kinks the band isn't afraid to slow it down a bit and write a song that touches the heart. The band existed from 1983/1985, released one demo tape in 1983, gigged heavily and left a lasting mark on the Italian Mod Scene.Compiled from their recordings from 1983/1985, all tracks were taken from the original 8/track tape, packaged with a sharp picture sleeve and double/sided insert complete with lots of rare photos.Limited to 450 copies. For Fans of The Jam, The Chords, The Letters, The Jolt and The Kinks.

Passengers
All Through The Night/new Life