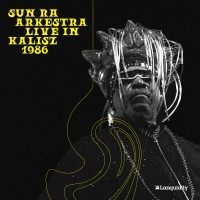 Sun Ra Arkestra Live In Kalisz 1986 sees the experimental jazz god appear in what would seem an odd time and place. His trip behind the Iron Curtain, three years before the collapse of the Eastern Bloc, to the ancient Polish city of Kalisz lit up the apparent greyness with a spectacular and memorable show. The finale saw the musicians leave the stage and walk around the audience before returning to the stage.