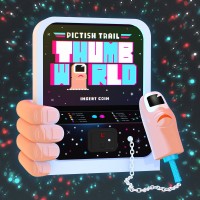 Scottish producer Johnny Lynch prepares the release of his eighth album as Pictish Trail, following four years on from his Scottish Album of the Year-winning Future Echoes. Probably his weirdest and most collaborative work yet, Thumb World was forged alongside visual artist Swatpaz, a process that had them both imagining that the music was taking place in a retro 80s arcade game world.