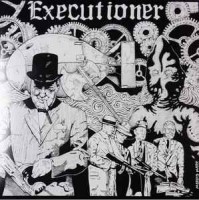 This short lived San Jose Punk&Hardcore band made an immediate impact in the South Bay and the surrounding suburbs, while they may have only been around for a few short years. With their distinctive metal influenced guitar work they sounded unlike many of their contemporaries who were bashing out 1/2/3/4 play it fast hardcore. Executioner had a much more developed style and a higher caliber of songwriting skills and the recording show just how ahead of the curve they were. This LP focuses on their early more punk hardcore sound with their distinctly British influenced sounding recordings from 82/83 where the influences of bands such as Discharge and GBH to Motorhead can be heard mixed with a healthy dose of American Hardcore angst and boredom.The LP features their studio recordings from 82 and 83 including the tracks from the legendary 1983 cassette only San Jose comp -Growing Pains- the packaging includes booklet,postcard,sticker, and insert

Alley Cats
Nothing Means Nothing Anymore

Archaic
Noise In Your Head