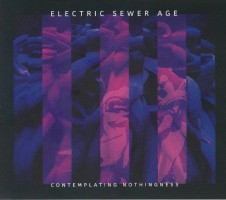 A beautifully surreal album of industrial and ambient soundscapes from Electric Sewer Age, now the solo vehicle for experimental musician and sometime Coil affiliate Danny Hyde. 'Contemplating Nothingness' is the third release from the project, originally started by the late Peter Christopherson, and consists of six wildly oscillating yet striking tracks clocking in at just over half an hour.