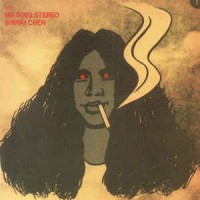 Shinki Chen was one of the leading figures of the Japanese psychedelic rock scene in the early 70s, seen as a Jimi Hendrix type figure in Japan at the time, the last recorded material (there's some with the band Power House and Foodbrain) consists of this album and the later album released by a different bad line up known as Speed, Glue and Shinki and their debut Eve was released in 1971. Whilst the band's style is often compared to Krautrock cousins, it lacks the dreamy lack of direction that a lot of them have and does not have the bore factor of the lighter-weight progressive rock acts. Shinki Chen & Friends might lack Joey Smith's amphetamine fuelled drumming but is generally bluesier with lots of strange keyboard effects, a fuzzy bass line and a relatively weeping guitar sound.

Pink Floyd
Piper At The Gates Of Dawn