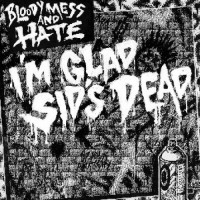 Noisy, angst-ridden, teenage, punk noise from Bloody Mess And Hate. Recorded in 1985, produced by GG Allin, and set for release in 1986, the record was shelved and only nine of the tracks were released as a rare, self-dubbed cassette in 1987 available from Bloody Mess himself. Finally restored to its full, filthy, scuzzy beauty, you get all 12 tracks. Limited edition of 500 copies.