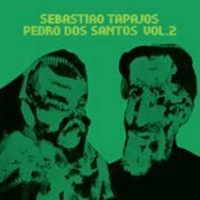 Back in stock! Recorded and originally released only in Argentina in 1972, the album shows an exquisite and delicate dialogue between the guitar of Sebastiao Tapajos and the percussion provided by Pedro Dos Santos that generates ambiences of unusual beauty and depth.From the personal approach to Jobim's classic 'Samba Do Aviao' to the energetic and fast paced 'Ganga', the album opening song, the mysterious beauty of 'Rio Das Ostras' to the cinematic moods of 'Ambush' (bossa meets action film music?), this "Vol. 2" is absolutely wonderful from beginning to end.It is a necessary complement to the much hailed Pedro Dos Santos album "Krishnanda" in the collection of anyone with an interest in the most adventurous sounds of Brazil and also an essential work in the discography of Sebastiao Tapajos.Includes the killer samba funk tune "Tornei a caminhar".TRACKLISTSide 11. GANGA2. DORA/SAUDADE DA BAHIA3. CATEDRAL4. FEITICO DA VILA5. LABERINTO6. ESCOLA DE SAMBASide 21. SAMBA DO AVIAO2. FEITIO DE ORACAO3. EMBOSCADA4. RIO DAS OSTRAS5. TORNEI A CAMINHAR6. SAMBADEN