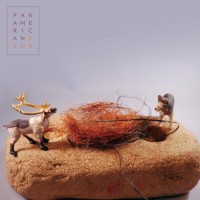 Pan American is Mark Nelson, formerly of post rock group Labradford. 'A Son' is his latest album, built on ideas such as tracking down his origins, looking back rather than forwards. It is inspired by working out how uncomplicated and straightforward music can be and a diverse range of artists such as June Tabor, The Carter Family, Suicide and Jimmy Reed. 'A Son' is a fairly stripped back affair, on which Nelson feels as though he has been as emotional and honest as he can be.

Cheese, The
Lands Over Our Heads