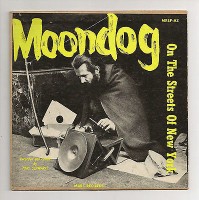 Moondog
On The Streets Of New York

From 1954 to 1962 field recordist Tony Schwartz frequently checked in with Moondog, his favorite street musician. Tony Schwartz made recordings of Moondog-s earliest compositions as they were coming into focus. Sometimes these recordings were made right on the street as Moondog busked, sometimes they were made in Schwartz-s studio, and sometimes they were made on NYC rooftops. The resulting recordings, many of which had never been released, were deposited at the Library Of Congress as part of the Tony Schwartz Collection in 2006 when Schwartz passed away, and this record was culled straight from these original tapes. Moondog-s music is as universal as it gets / part classical music, part Native American, part European folk, and part something completely unique.