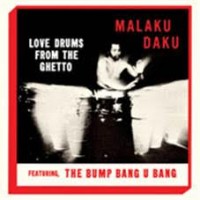 During the mid 70s Malaku recorded and produced the album Love Drums From The Ghetto, an album that truly showed off his skills as an artistic genius. With this album Malaku Daku delivered an important contribution to the never-ending rich heritage that is African American music. When you listen to (and feel) these exploding pulsations and rhythmic-melodic drumbeats you have to realize that just one man is playing both the top and bottom drumbeats on no less than 8 congas at the same time!Rare Philadelphia Tribal Afro/funk private pressing First vinyl reissue since 1974 Remastered from the original tapes Limited to 500 copies, comes with obi strip & insert/liner notes