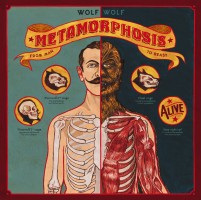 Terrible! WolfWolf howl again! We warned you, didn't we? Now it is too late. WolfWolf are wolfwolfin' again! Twelve songs long. They howl at graves and thirst for blood, go to hell and climb to heaven, my goodness, it's beautiful! Nice and creepy. Who said Screaming Jay Hawkins? «No», the guest musicians who played on WolfWolf's third album are shouting out loud! Because this one now rattles even more fluffier and funnier than ever before, from one transformation to the next metamorphosis. Even when Dieter Meier participates. Yes, Dieter Meier of Yello. At least on one song. The rest? WolfWolf, what else? We warned you. Now you need to listen. Time to say hello.

Missing Monuments
Too Many People