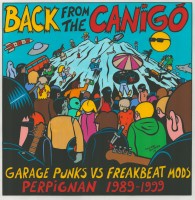 The Limiñanas have been international stars since 2010. A few years earlier, the Hushpuppies were in the spotlight. Two groups from North Catalunya who have written some of the most beautiful pages of French rock thanks to their garage and neo-sixties style. Two groups born from the flourishing sixties style punk and mod scene of the 1990s in Perpignan. Back from the Canigó explores that decade, which saw the emergence of more than twenty groups from different scenes that were to fuse together in the end. Through more than thirty tracks, many of which are released here for the first time, this album brings to light the pioneering work of Les Gardiens du Canigou and of The Ugly Things, as well as eleven other groups who make worthy heirs to the former (The Beach Bitches, Uguet 68, The Feedback, Les Buissons, The Lykids, The Lazy Sundays, The Vox Men, The Lightning Circus Band And The Boom Boom Beat, Human Potatoes, The Rippers, Psiquàtric Xaïs).From savage garage revival to sixties punk, from mid-sixties freakbeat to more psychedelic sounds, Back from the Canigó amplifies the echoes of a town turned into the French capital of these underground genres. These are the beginnings of a still active garage scene that, a few years later, would see the emergence of groups such as Les Bellas, The Sonic Chicken 4, Gaz Gaz, Les Fatals, Les Go-Go Players, Jack Of Heart, Hair And The Iotas. But that's another story, perhaps to be told on Volume 2. In the meantime, this is the 90s at the foothills of Mount Canigó.