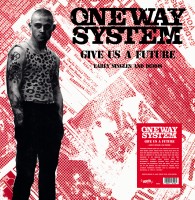 One Way System
Give Us A Future - The Singles And Demos

Formed in 1979 in the northern English town of Fleetwood, Lancashire (a former major fishing port that had declined since the 1960s), One Way System was one of the most highly-rated 'Street punk' groups that spun off from the British hardcore and Oi scenes. Mowhawk-sporting lead singer Gavin Whyte was initially joined by guitarist Craig Halliday, bassist Gaz Buckley and rapid-fire drummer Tez McDonald< the early demos of "Jerusalem," "Spokesmen For Teenagers" and "1980s" included here were cut with that lineup, before former Zyklon B member David "Crabby" Ross joined as second guitarist, yielding theincendiary single "Stab The Judge" and the No Entry EP, issued by Blackpool's Lightbeat Records in 1981. Halliday later quit the group and when McDonald joined The Fits, accomplished drummer Tommy Couch brought a totally different musical dimension, his command of the kit well beyond the abilities of most of his contemporaries. In addition to the demos and the Lightbeat material, this compilation also collects the singles and EPs issued by Cherry Red's Anagram subsidiary between 1982-84, including the inaugural 45, "Give Us A Future."