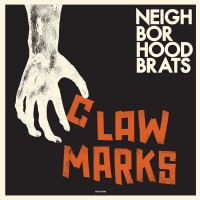 Neighborhood Brats return with their second full length record, and let-s just start by saying it's a scorcher. The band plays a brand of punk that, had they existed in 1977, would have been right at home on Dangerhouse Records alongside The Bags and The Avengers. That said, 'Claw Marks' might just be the first Neighborhood Brats records that truly captures and urgency and energy of the band-s chaotic live show. The record finds the band at the top of their game in terms of songwriting, musicianship, and lyricism. So much so that lead singer Jenny Angelillo says that there are several songs on the album that could easily be her epitaph. 'Claw Marks' is an upbeat but beaten down soundtrack to the dystopian nightmare we find ourselves living in.