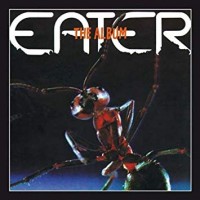 Formed in early stages of the British punk explosion by four high school mates in Finchley, north London, Eater quickly established themselves as one of the youngest andrawest bands on the scene. Lead singer Ashruf Radwan had an Egyptian heritage, hidden by his alias, Andy Blade, and guitarist Brian Haddock became Brian Chevette once in the fold

Gen Pop
On The Screen