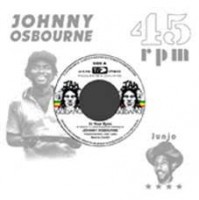 "In Your Eyes" is the hypnotizing tune from Johnny Osbourne with the Roots Radics in full effect originally from 1982, and it was sampled countless times in drum & bass (i.e. Serial Killaz). Here's for the first time the legitimated seven inch pressing for the original ruling version, backed by world cup winning Scientist dub. Both sides are produced by Henry Junjo Lawes, recorded at Channel One studio with the final mix by Overton "Scientist" Brown at King Tubby's studio.