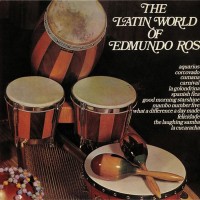 Trinidad born bandleader Edmundo Ros was a key figure in Latin music in post war Britain. Immigrated to London in the late Thirties he is the one who effectively introduced the Rhumba and Samba to the U.K. A charming man and multi talented musician, Ros became a sensation, attracting the cream of London society to his appearances at the lavish Coconut Grove. Thanks to his infectious mix of authentic Cuban Rhumba and other ingredients including Mambo, Calypso and Samba, Latin music became a significant part of postwar Britain's dance scene. Originally released on Decca Records UK in 1970, 'The Latin World of Edmundo Ros' stands as a great introduction to the exotic sound of Ro's big band.