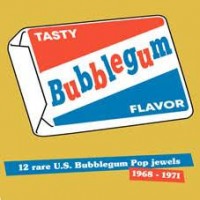 Talking about Bubblegum Music brings us back to America at the end of the Sixties. In a world where the music industry was at its very peak and the 7" format singles production was rather schizophrenic. The worldwide success of Ohio Express's "Yummy Yunmmi Yummi" and 1010 Fruitgum Company's "Simon Says", opened up the doors to a plethora of new bands ready to take the chance of this new born phenomena. Jerry Kasenetz and Jeffry Katz were the two producers behind many of these projects, while the bands were mostly formed by the same group of studio musicians including the unmistakable nasal voice of singer Joey Levin (Joey Ramone's main inspiration). Avoiding the classics, this compilation will get us through a dozen of rare and unknown productions. Twelve stellar Pop gems dated between 1968 and 1971 and a bunch of great simple melodies, sticky like chewing gum. Yummy!!! Come and taste it.Tracklist> Side A1( PROFESSOR MORRISON-s LOLLIPOP / Oo/Poo/Pah Susie2( JOHNNY CYMBAL / Save All Your Lovin- *Hold it For Me(3( GIDEON / Oh! Sweet Love4( ZEBRA / Bring Me to My Knees5( BLEUS / Milk ^ Honey6( HUNGRY TIGER / Fee/Fi/Fo/Fum Side B1( The YUMMIES / Patty Cake2( AMERICAN MACHINE - Snowball3( JOEY LEVINE / Come On My Baby4( KASNAT ^ KATZ FIGHTER SQUADRON / Picken- Up Sticks5( JAMIE ^ The SWEETCORN / I-m Gonna Love You6( JORDAN PARKER REVUE / Ginger Bread Man