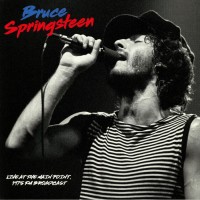 The legendary 1975 radio broadcast featuring Springsteen and the E Street Band in full action at the Main Point club in Philadelphia just a few months before the release of their masterpiece "Born to Run". Based on a breathtaking set list full of both old and new songs and a bunch of great covers, this concert for many Springsteen fans, remains one his greatest shows ever!!!Tracklist A1Incident On 57th StreetA2Mountain Of LoveA3Born To RunB1The E Street ShuffleB2Thunder RoadB3I Want You