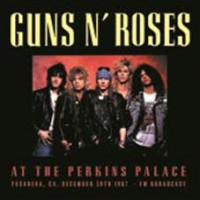 Axl ^ Co. played 4 shows over 5 nights at the Perkins Palace in Pasadena at the end of 1987. The band had been touring almost constantly since the release of their legendary debut, Appetite For Destruction, headlining as well as opening for Motley Crue and Alice Cooper, and these shows were their homecoming, finally back in LA after months on the road. Steven Adler had an injured hand so Fred Coury of Cindarella sat in on drums, and the band ripped through their road/tested repertoire in front of an adoring hometown audience. It-s clear the band is happy to be back home, as this 30 December show is one of the most ripping performances of their early career. Another classic live broadcast from Egg Raid.Track list> 1. It-s So Easy 2. Move To The City 3. Mr. Brownstone 4. Out Ta Get Me 5. Sweet Child O- Mine 6. Used To Love Her 7. My Michelle 8. Rocket Queen 9. Knockin- On Heaven-s Door 10. Welcome To The Jungle 11. You-re Crazy 12. Blues Jam 13. Night Train 14. Patience 15. Mama Kin

Entombed A.d.
Back To Front-picture (2lp)