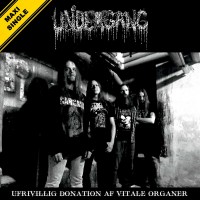 The wait is over. after nine months of hunger, there's new fresh meat at the butchery. And for true devoted UNDERGANG fans, nine months is near to a lifetime. Sometimes musical cannibalism is dangerous, and it's just an advice for their neighbors! This EP consists of two new songs, "Ufrivillig Donation Af Vitale Organer" and "Man Binder Ikke Et Dodt Menneske", both in the typical heavy down tuned style of brutality from the Danish band, similar to what you heard in "Misantropologi" from 2017. In the other hand, there's an incredible rendition of cult Finnish masters FUNEBRE and the classic "Grip Of Insanity,", the song that closes "Children Of The Scorn" from 1991. And if that's not enough, the EP ends with a live version of "Indhentet Af Doden" from their 2010 debut with the same title. All in all, a great appetizer for new sickness to come by these butchers. Mandatory if you're hungry for some steak!