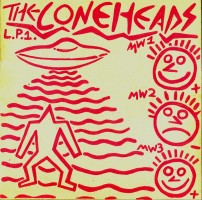 "14 Year Old High School PC-Fascist Hype Lords Rip Off Devo for the Sake of Extorting $$$ from Helpless Impressionable Midwestern Internet Peoplepunks" The NWI scene is on another level to the rest of humanity. Oh yes, it's going to get weird once you put this shit on. Coneheads are a basement punk band who have decided to douse themselves in creepy circus riffs, robot meets alien vocals with science-fiction wackyness. Keep in mind, it's still punk and damn catchy! Who said weird can't be catchy? They sound like DOW JONES AND THE INDUSTRIALS on speed or a more manic DEVO. This would perfectly fit in 1982 but I doubt they were born before 92. Major points for historical awareness! The rhythm barrels along while solos are interspersed at six second intervals, desperately played like a blur between a Jerry Lee Richard piano solo and a fevered banjo picker who lives in an Appalachian cave. It's hard to find the line between cheap gimmick and true weirdness sometimes, but this one shows that line with every spin. This band is highly addictive and leaves you stunned!

Mc5
I Just Don't Know/ I Can Only Give You Everything

Alien Nosejob
Suddenly Everything Is Twice As Loud