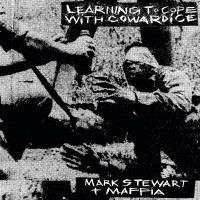 'Learning To Cope With Cowardice' was the debut solo album by The Pop Group vocalist and post-punk pioneer Mark Stewart and The Maffia. This reissue, regarded as the definitive edition, is coupled with 'The Lost Tapes'. Following the break-up of The Pop Group in 1980, Stewart went to New York and began picking up ideas for an industrial hip-hop sound. With the help of producer Adrian Sherwood and crack team of reggae musicians including 'Deadly' Headley Bennett and Bonjo Iyabinghi (African Head Charge) the vision became a reality. Originally released in 1983.